The Most Commonly Stolen Cars in 2021

No matter what kind of vehicle you own, there is a risk it may be stolen. That's according to the National Insurance Crime Bureau (NICB), which recently published its Hot Wheels report of the most commonly stolen vehicles in America.

The report highlights that, following years of steady decline, the upturn in vehicle thefts in 2020 has continued into 2021.

Contributing factors to this increase include the global pandemic, which has led to a nationwide economic downturn. However, several vehicle thefts are entirely preventable, with owner complacency a significant reason for vehicle theft.

In 2021, thieves stole 209 cars every day because owners left keys or fobs in an unattended vehicle.

Also highlighted in the report are the most commonly stolen vehicles by state. To help raise awareness of vehicle theft, LotGuard has analyzed the information and presents the key findings below. 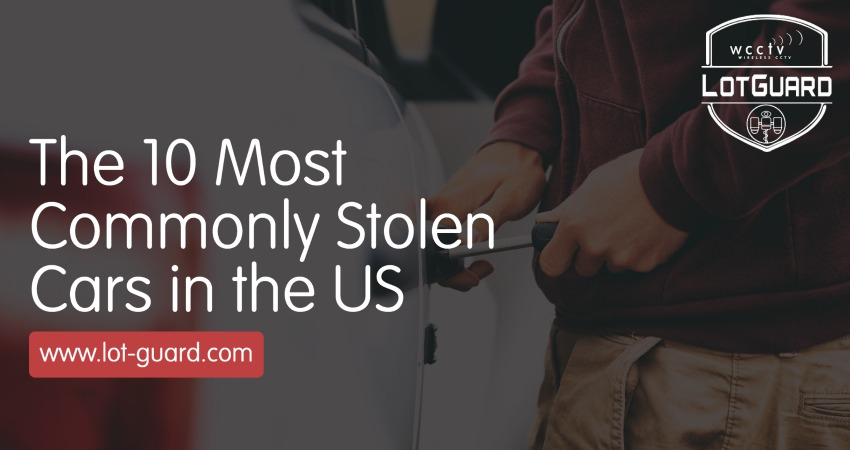 As the best-selling truck in the US for 43 years in a row, it's perhaps unsurprising that Ford’s full-size pickup is the most stolen vehicle in nearly half of all U.S. states.

Honda Civics are incredibly popular with thieves as they contain multiple parts interchangeable with other Honda vehicles. Thieves target the cars to strip for various component parts that they can easily resell. The 2000 version of the car is particularly popular as it features fewer sophisticated security measures.

Chevvy pickups have featured on the Hot Wheels list every year since 2007. Demand for parts and lack of anti-theft technology have made them a prime target for thieves, and the number of stolen pickups continues to rise every year.

According to the most recent Hot Wheels report, thefts of Honda's are prevalent along the East Coast, with most thefts occurring in Connecticut, Delaware, Massachusetts, New Jersey, and New York.

As with the vehicles we have previously listed, Toyota Camrys are exceptionally popular vehicles and have interchangeable parts - making them a desirable target for thieves.

The Nissan Altima made its first appearance on the Hot Wheels list in 2021 and is one of the most 'modern' vehicles amongst the top 10 most stolen vehicles. This is because sophisticated ar thieves have learned how to hack the car's keyless entry system, and with 'push-to-start' functionality, Criminals can steal Altima's in seconds.

Like the Altima, the Toyota Corolla has several more modern security features that thieves have been able to bypass and make a quick getaway with the vehicle; the 2018 model is a particularly popular target - and the joint latest model version to feature on this list.

The 2001 model of Dodge Pickup is the most commonly stolen version of this particular vehicle as it is now discontinued, making parts a particularly converted item for resale.

Joining the Altima with the dubious distinction of being the newest model vehicle to feature on this list, the 2018 GMC Pickup is the most popular stolen model within their range.

Older models of the Honda CR-V are popular with thieves who covet their parts for high-value resale, with the 2001 model the most popular.

Most Common Vehicle Thefts by State

The graphic below shows the most commonly stolen vehicle by state based on the information found in NCIB's most recent report. 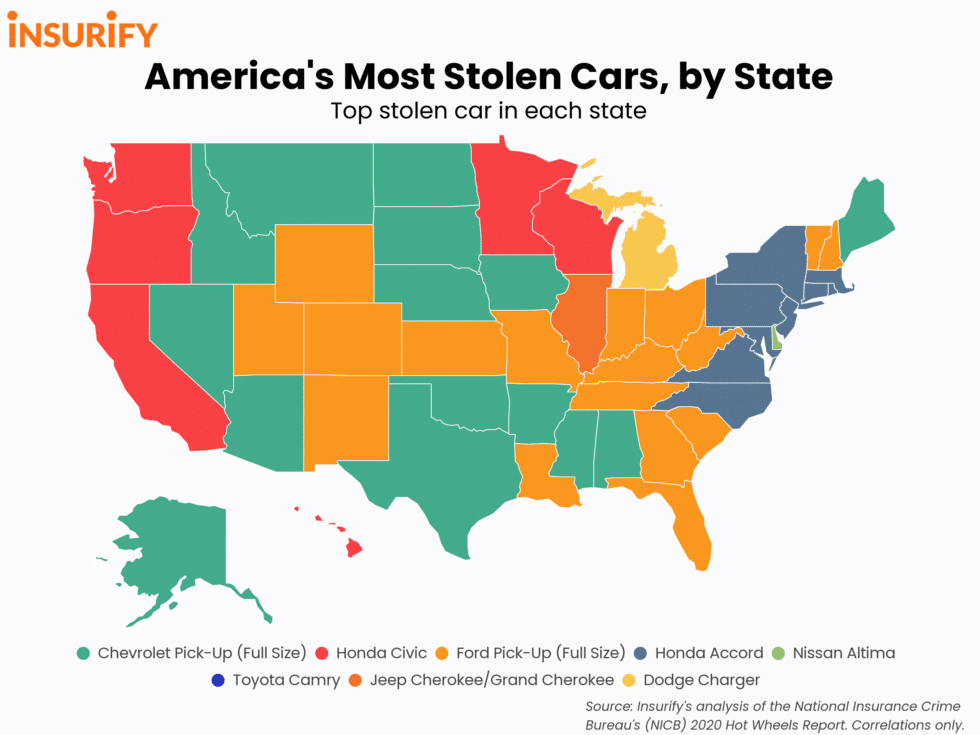 Research shows that car theft per hour parked is highest when vehicles are in parking lots.

This could be because thieves below most parking lots are poorly secured and have poor lighting facilities. The complex layout of lots creates many natural hiding spots for thieves to operate covertly.

LotGuard's mobile video surveillance units are designed to detect, mitigate, and report any criminal activity and enhance the security of parking lots.

The video below shows how our proactive crime prevention solution works:

LotGuard can operate regardless of power, internet, and mounting pole availability at your lots.

Reach out to our LotGuard team today to learn more.

Ready to learn more about how WCCTV can protect your parking lots? Call our team today on 877 805-9475 or email sales@wcctv.com